The Legend of Princess Onarga

The Fairest of the Indian Maidens 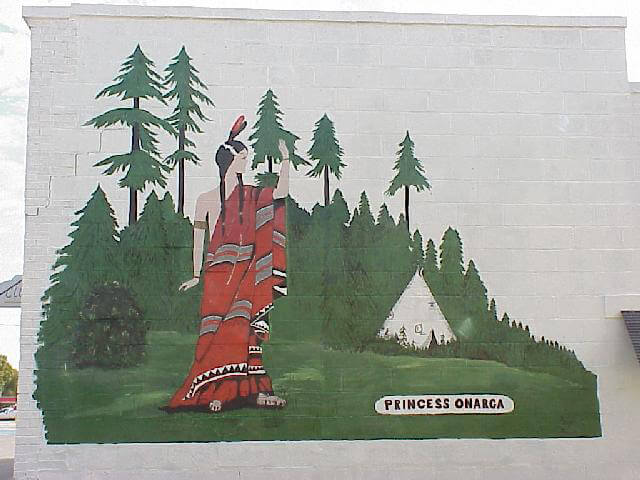 Among the great oak trees twinkled the tiny campfires of the Iroquois. It was the time of the Harvest Moon and the Great Spirit had been kind. Never had there been so good a crop of Indian corn, the herds of buffalo roamed in ever increasing numbers over the great plains, the streams abounded in fish, and the Indians were happy.

At the door of the wigwam sat the great chief of the Iroquois and by his side sat his daughter, Onarga, fairest of the Indian maidens. Together they looked out to where the leaves of corn rustled in the gentle breeze, and then to where the moonlight filtered through the branches of the giant Oaks and danced upon the thick, wavy grass.

"Father," asked the girl, "why does the North Wind rustle like the waves of many waters through the leaves of the Oaks and across the fields of corn?"

"Daughter," replied the old chief, "The Great Spirit has been kind. He has sent you to the people of the Iroquois and where you step the grass of the fields grow green and there is plenty of feed for the buffalo and they stay with our people, when you touch the corn it bears big ears and there is much food for our tribe, and when you sing the birds of the forests sing with you. The rippling waters of the springs and rivers laugh with joy when they hear your voice and the Great Spirit smiles and is glad."

"What you hear, Oh Fairest Daughter of the Morning, is not the wind among the trees but the sound of many waters and the dipping of many paddles, it is the sound of The Great Canoe."

The next morning, when the Sun God climbed above the mighty Oaks, there was a sadness in the camp of the Iroquois, for during the night the soul of Onarga, the Indian maiden, daughter of the great chief, had gone Northward in The Great Canoe to the Happy Hunting Grounds of the Iroquois, the land of the Shawandossee, the home of the White Rabbit.

Each year, when the great fertile plains of the Iroquois are flooded with the pale, shimmering light of the Harvest Moon, the Great Canoe floating on the billows of mist that overhang the rivers, and manned by the spirits of the Iroquois warriors, floats with the North Wind to the faraway hunting grounds from whence it came.

There are some who claim to have seen it passing in the night and in it the form of a beautiful Indian maiden, her left hand raised to Heaven with the palm outward, the Indian sign of benediction and farewell.

Each season the Harvest Moon shines between the mighty Oaks where sleeps Onarga, the little Indian maiden, and on her grave in the still quiet of the night the "shadow things and all the moonlight things come out to play." Under the great Oaks, where twinkled the camp fires of the Iroquois, there stands the village of Onarga.

The happiness and blessing of the Indian maiden has followed throughout the years and the land of the Iroquois is still the most fertile in all the great plains. The Egyptian Trail, Route 45, runs through the fields of growing trees and flowering shrubs. Many travelers who have passed through these fields and along this trail during the season of the harvest moon, claim to have seen the spirit of Onarga gliding among the flowering shrubs.

We, who carry on the business today, believe that there can be no more noble occupation than that which adds beauty and enchantment to the world's greatest institution, the American Home, and with this thought in mind we shall hold forever sacred the trust and confidence of our customers and friends.